Celebrity chef Todd English, Iron chef USA star who has opened restaurants around the US and written multiple cookbooks, was arrested on Sunday on a charge of driving while intoxicated, according to authorities.

Police in Southampton arrested English on Sunday morning on a county road on Long Island. He made a court appearance later in the day, and posted $1,500 bail.

The circumstances regarding the arrest are unavailable at this time. 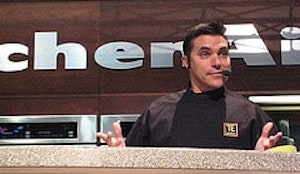 The chef is the creative force behind a number of restaurants around the country, including Olives, Figs and Fish Club. He also has been a regular on television programmes, including Iron Chef USA.

English has written several cookbooks and has been honoured by the James Beard Foundation for excellence and achievement in cuisine.

The state of New York is known for the having some of the toughest criminal DUI laws in the country. Not only does the State penalize drivers with a Blood Alcohol Content above .08 percent, but it also penalizes drivers with a BAC above .05 percent. Driving with a BAC of .08 percent or above is known as a DWI or Driving While Intoxicated and driving with a BAC between .05 percent and .07 percent is classified as a DWAI or Driving While Ability Impaired. New York also classifies the criminal offense of driving with a BAC of .17 percent or above as an Aggravated DWI.

A DWI charge is quite serious. These cases can also be somewhat complex as each case is different. As soon as you have been arrested for a DWI offense it is important to contact the right attorney as soon as possible. A New York DUI Defense Lawyer at Whittel & Melton can ensure that you understand the charge you are facing and help you move past this difficult situation.

If you have been charged with a DUI/DWI or DWAI, please contact us as early on in your case as possible. Certain defenses must be applied right away or you could lose your right to assert them. The sooner you contact us, the sooner we can begin working to preserve your rights. Because of New York’s “prompt suspension” law, your driver’s license will likely be suspended immediately following your arraignment. A New York DUI Attorney at Whittel & Melton can challenge this suspension from the New York DMV and help you obtain conditional driving privileges or a “hardship” license. For a free consultation please call us today at 866-608-5529 or contact us online.