Authorities allege that a clinic in the Bronx was controlled by drug traffickers, and the patients, doctors, prescriptions and even urine samples were part of an intricate scheme to redirect oxycodone to be sold on the street.

In a federal indictment, prosecutors claim that corrupt doctors were paid $300 in cash for fraudulent medical visits that lasted just minutes, involved no actual physical examination and led to a consistent number of prescriptions for large quantities of oxycodone.

According to a government court filing, for more than three years the doctors at this Bronx-based clinic wrote about 31,500 medically unnecessary prescriptions for oxycodone, involving about 5.5 million oxycodone tablets with a street value of up to $550 million.

Federal prosecutors allege that members of the oxycodone ring used threats, intimidation and violence to protect their access to the clinic and its doctors, going as far as staging armed bodyguards near the clinic.

The indictment shows that Oxycodone is a highly addictive, narcotic-strength painkiller, and these prescriptions have colossal cash value to drug dealers. In New York City, a 30-milligram tablet has a street value of $30 to $40. The value for one tablet can go as high as $100 per tablet elsewhere in country. The indictment adds that a single prescription for 180 Oxycodone tablets can profit a distributor as much as $18,000 in cash.

The investigation into the Bronx clinic involved the use of at least a dozen cooperating sources, confidential informers and undercover agents in what has been called “the largest pill mill in the Northeast.” 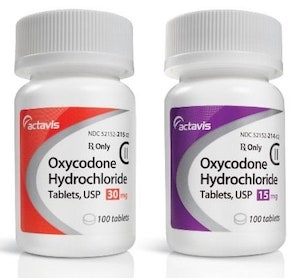 The federal indictment charges one doctor, the owner of the clinic and others in the city, as well as 23 other people in connection with the scheme. The doctor is accused of collecting nearly $12 million in fees over three years in the scheme, according to prosecutors.

The doctor, who pleaded not guilty, was permitted home detention if he meets certain conditions of a $5 million bond.

Another clinic doctor faces state charges of conspiracy and illegal prescription sales. He was ordered held without bond, and entered a not guilty plea to the charges.

The doctor is accused of writing nearly 18,700 prescriptions to over 4,200 people since June 2012. These prescriptions generated about three million pills, with a street value of more than $90 million.

Federal prosecutors claim that most of the purported patients that visited the clinic were recruited and paid by oxycodone distributors, known as crew chiefs, to pose as patients to receive the prescriptions from doctors. In return for their services, these recruiters were apparently paid up to $500 for obtaining and handing over the oxycodone tablets they obtained. The crew chiefs allegedly paid clinic employees hundreds of dollars in cash to get their recruits into the clinic to see a doctor.

The indictment also claim that the clinic served people who were not part of the operation, like addicts and drug dealers, who could pay an admission fee of $1,000 or more to get into the clinic.

The illegal sale and distribution of prescription medications, such as painkillers like Oxycodone, has become a serious issue across the United States in recent years. In fact, a recent study observed that Oxycodone is the most abused prescription drug on the market today. As a result, the DEA and local law enforcement agencies have increased their efforts to investigate and prosecute crimes that involve prescription medications.

If you have been charged with a prescription drug crime in New York City, this does not mean you are automatically guilty of this offense, so do not give up any of your rights. A New York Drug Trafficking Attorney at Whittel & Melton can help you mount a powerful defense to combat these charges. Please call us today at 866-608-5529 for a free consultation to discuss the facts of your case. Being arrested for a drug crime, such as trafficking or possession, does not have to ruin your reputation within the community and your career.